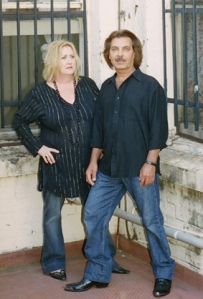 Between them Pauline and Rob have over sixty years experience in the music industry. They are true professionals and always put on a great show. Their wide repertoire means they are versatile enough for any occasion.

Rob toured on the east coast of Australia in the 70’s and 80’s, supporting bands like Cold Chisel, Skyhooks, The Angels, Dragon and many more.  When he returned to Perth he played with several bands before joining Dizzy Miss Lizzy in 2006.

Pauline’s professional career started in 1975 when she left her hometown of Collie and joined Australia’s first all girl band “Crumpet” as lead singer and rhythm guitarist. Pauline played in several other bands following that, then took some time off to travel and to have a family.

Dizzy Miss Lizzy was formed in 1993 – originally Pauline with Gary Daniels on keyboard, the duo performed as support act for ELO (Electric Light Orchestra), 10CC and Neil Sedaka – to name a few – then Gary left, and Rob joined on lead guitar. Together Rob and Pauline have supported many eastern states bands, including John Williamson, and as they say, the rest is history!

For bookings call us!