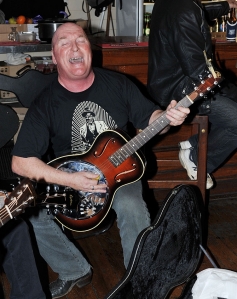 Michael Power arrived in Perth with a small bag and two guitars in 1987.
After two decades of making music, Michael has travelled extensively around Western Australia, performing solo,duo,trio or full band shows. He has amassed sigtnificant amounts of experience, both in cover and original songs
As a resident of Fremantle, Michael can be seen every weekend at the Fremantle Market Bar pumping out a set list of solid hits.

Mike has played every kind of gig you can think of: From solo gigs at the Fremantle Market Bar, to opening for international superstars (such as Sweet); from private functions to headlining festivals (Blues and Roots 2008), he has played them all.
Some notable awards and accolades worth mentioning during Michael’s impressive career include:

Michael has played at the Norfolk Basement, Moon & Sixpence, the Indi Bar, and many more of Perth’s tops music venues, making him an experienced, reliable entertainer that can guarantee you a great gig!

He also plays in a four piece band called Powertrain.

Check out Michael’s Demo.
Powertrain’s Songlist 2014
For bookings, call us!