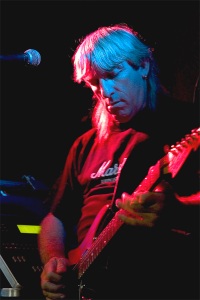 Originally playing in Adelaide bands including “Vampyre” and “Curfew”,Rod has over 30 years experience within the music industry both as a performer and songwriter. In 1976 Rod moved to WA, performing with various bands in the Perth hotel and tavern scene. Rod then went on to become a soloist and performed all over Perth and in regional WA.

In 2000 Rod was asked to join the “Pearl Coast Band” – one of the hardest working bands in WA – as featured on an episode of the ABC’s “New Dimensions” in 2003. “Pearl Coast” toured all over regional Western Australia, earning a reputation for professionalism and ability to perform a variety of popular music ranging from the 70’s to present day. They also supported such bands as “The Zep Boys” in Perth and became a regular support band for the “Jimmy Barnes” regional tours early in 2004.

During this time Rod was also asked to step into the well-known Perth rock band, “JETS” and participated as one of the guitarists in performances at the Raffles Hotel in 2001 and 2002.

With the amicable disbandment of “Pearl Coast” in 2004, Rod decided to return to his previously successful solo show. His experience makes him able to successfully play to audiences in hotels, taverns, private parties and restaurants. Rod has played many successful private gigs and supported Artists such as Ross Wilson and Daryl Braithwaite, maintaining his reputation for being able to deliver a high powered, professional performance, with a full band sound – from laid back through to hard rock. His show includes high tech sound and lighting.

For bookings, call us!