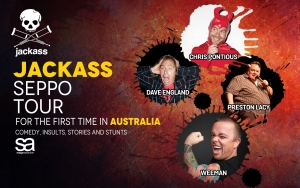 The boys from Jackass are coming to town! In a show that is incomparable to anything else, the hilarious, crazy, daredevil stuntmen are here to make audiences laugh and scream. Four of the guys from the hit television show and movie franchise will be touring Australia for the very first time this October. Get ready for Wee Man, Preston Lacy, Chris ‘party boy’ Pontious and Dave England as they take on Aussie audiences!

Their epic stage show will see the four iconic stars do a mix of stand-up, stunts, stories, insults and observations. The show will run for 90 minutes and will include a q&a with time for autographs and photos post show.